Goats are good for your health 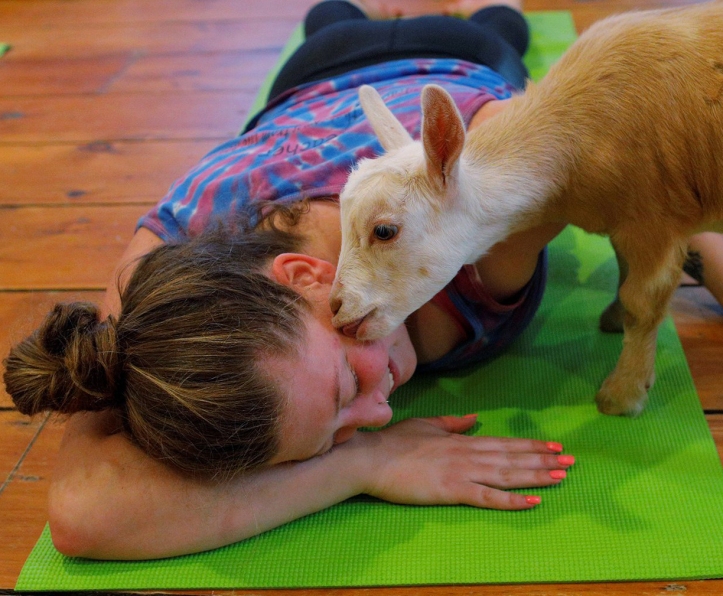 Almost every one now knows that goat yoga is the new age, new rage.  I tend to forget about current fashions because I get busy with other things, like barn cleaning.  When a person I barely know who performed house sitting and goat walking duties for several days when I was overseas asked to come back to my house periodically to spend time with my goats, it reminded me that this post needed updating.  I get to walk them everyday, which helps to keep me centered and grounded, but some folks are just not in that position. And speaking of positions, here is a fun link to an article entitled “Downward Goat” concerning the goat yoga craze.  Needless to say, I totally see the appeal.

“The goat interaction calms people down and improves their mood, which has an overall positive impact as well as complementing the therapeutic effects of yoga”.

And now for the research and less sexy end of things…

Hungarian researchers have shed a light on what many goat fanciers have known all along.  Their study results showed that 63 volunteers felt better and even more trusting than 62 study participants that went to a botanical garden for the same length of time. Goats are medicinal even if you don’t drink the milk!

The entire abstract from the study is included below.

Human-animal interaction (HAI) studies have shown that after positive interaction with animals, the concentrations of plasma and urinary oxytocin increases in humans, while the degree of state anxiety decreases. Moreover, intranasally administered oxytocin improves the ability of humans to infer mental states based on the eye region of other humans, increases emotional empathy and the feeling of trust in other humans. The aim of this study was to investigate the effects of animal care taking on human well-being and social judgements in a field study. The experimental group (n = 63) consisted of volunteers on a goat farm where they took care of goats and goatlings. Subjects in the control group (n = 62) visited a botanical garden. Hence, participants in the two groups were exposed to similar conditions (natural setting, mild physical activity), but only those in the experimental group had positive interaction with animals. We investigated the effects of animal care taking using similar tests as those used in previous studies which investigated the effects of intranasally administered oxytocin. In the experimental group, after HAI, we observed a greater decrease in state anxiety and a more pronounced increase in trust than in the control group. One strength of our study is that we were able to show the positive effects of interaction with animals in a completely natural environment and situation. Based on our results, volunteer programs on farms – becoming more and more popular in recent years – may become an important new direction in animal assisted therapy.